Happy Feel Old Day; Happy Gilmore is now twenty years-old. To commemorate this occasion, what better time to take one more trip into the Adam Sandler time-machine and see if the comedic actor, who now looks so incredibly bored in all of his films, ever had talent or even energy.

Last year’s venture into this realm found enjoyable results with Sandler’s breakout hit Billy Madison, a peculiar, weird and slightly edgy romp of awkwardness and fuck-you absurdity. Will this round bring more good vibes, or will Happy Gilmore mark the first step into the significant downward spiral of annoyance that became Sandler’s career.

Released on February 16, 1996, Happy Gilmore is about a traditional Sandler figure; the angry man. This version is a failed hockey player prone to fighting so much that somehow even that sport won’t keep him in the game. Sandler’s character is in desperate need of funds to keep his grandmother’s house and her out of a creep retirement home run by a not-yet big-time Ben Stiller. He turns to golf after discovering an innate talent for smacking the shit out of a ball. Can Sandler’s Happy keep his act together and find the finesse to excel as a professional golfer? Will the stuffed-shirts and khaki pants allow for a man as beer-swilling and profane as Happy to play alongside them? So goes the movie.

If Billy Madison was the film to put Sandler on the map as a possible movie-star, Happy Gilmore was the financial success that began to turn heads. Billy Madison ranked as the 65th highest grossing film of 1995. Roughly a year later, Happy Gilmore rocketed to 37th, making over $41 million, which adjusts to roughly $75 million today according to Box Office Mojo.

Happy Gilmore was one of a handful of films I had recorded on VHS from Starz that basically lived on my television in the back half of 1996, right alongside Empire Records, Clerks and Pulp Fiction. The film’s strange gags and pissy vibe were perfect for a teen boy, with a helping of annoyed aggression to put it over the top. This was doubled-down on by the general reception to Sandler at the time by all non-MTV media, which labeled him a loud goofball not worthy of attention.

Had these folks not listened to his comedy albums? There was an angry goat in them? And a hypnotist who farted a lot? Wait…those don’t sound that promising. Uh-oh.

Above anything else Happy Gilmore provided, it gave us Christopher McDonald’s Shooter McGavin. One of the all-time great movie assholes, Shooter, “Ate shit like you for breakfast,” and was an utter joy to root against. I refuse to believe that chunk of this film doesn’t hold up.

After last year’s successful outing with Billy Madison, I believe the long thought history that Sandler started off strong and lost his touch isn’t merely wishful thinking of men in their mid-30s in the United States. There’s a crocodile waving in the sky. There’s Carl Weathers. There’s Shooter Fucking McGavin. There’s…oh no…Grown Ups, Jack and Jill and The Benchwarmers director Dennis Dugan.

If Billy Madison is a crazy bit of unbridled id that throws its antics everywhere with glee, Happy Gilmore is that mental capacity medicated with a handful of pills and smoothed out for a mass audience. Neither the trainwreck that would be most future Sandler films or the odd bit of genius of its forbearer, Happy Gilmore is a pleasant enough comedy with significant peeks, simultaneously working as a clear roadmap to where Sandler would eventually take his career.

In Billy Madison, Sandler’s protagonist was basically a jackass to all except a few close friends, necessary love-interest and children. With Happy Gilmore the prick who loves his family element that was sprinkled in the majority of Sandler’s later movies enters the picture. It makes sense, even if the choice makes for a more ordinary outing. That standard nature, with the sports movie clichés about an underdog, plays a bit blandly, particularly in a last act that goes on and on far past its ripeness, with one hurtle (being hit by a car) after another (a massive camera rig in the way of his tournament winning putt).

In contrast, the movie launches into its premise quickly. We see Happy as a kid, loving hockey because his dad does. Despite papa getting killed at an actual game, Happy still wants to play the sport. His talent at launching a puck is shown against his uselessness in all other skill-sets. Within about ten minutes, Happy is introduced, his house-saving dilemma is shown and the guy’s uncanny hitting ability is revealed. This nimbleness fails to continue. We get is a lot of okay parts, with Happy getting disciplined by golf muckity-mucks and a romance with Julie Bowen and whatever haircut she is sporting. These scenes, not poorly done per se, stop the laughs and feel like filler. 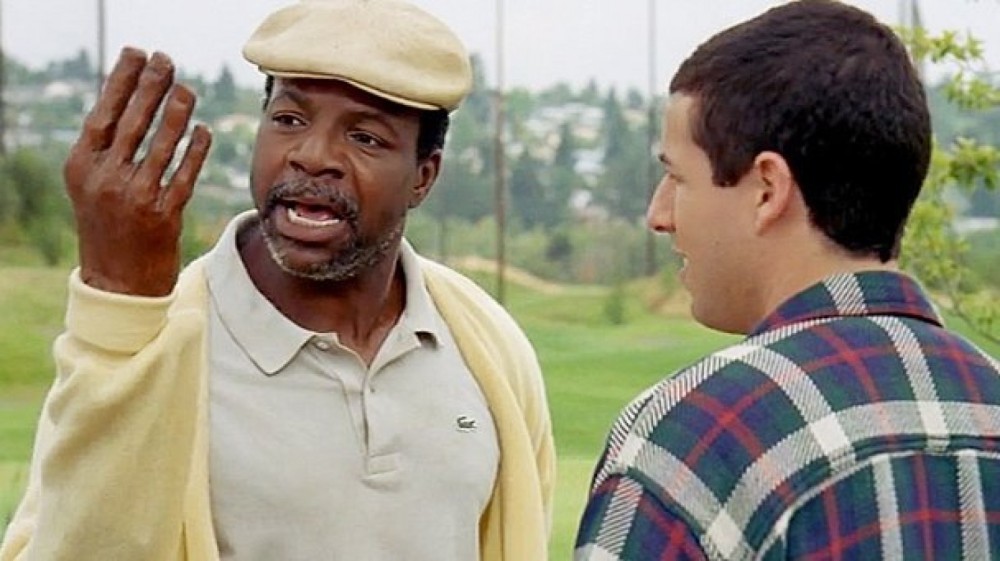 Where Happy Gilmore excels is when it’s ridiculous. The highlight of the movie is easily Carl Weathers as Chubbs, the golf-pro that sees potential in Happy. Plus, you know, he had his right hand chomped off by an alligator. The depiction of the wooden replacement of Chubbs’ appendage, already bulky and flailing, only gets worse as its proceeded to be run over, poorly glued back together and missing several digits. When the movie cuts to Chubbs calmly restructuring the thing as he watches Happy on television, the uselessness of the endeavor is perfectly staged.

Largely, the shorter and less integral to the plot the gags are, the better they turn out to be. As useless as the love-angle is between Sandler and Bowen, it provides for a marvelous moment where they spend a date on an ice-rink to the sounds of Lionel Richie and Diana Ross’ “Endless Love.” With our would-be couple kissing in the background, the camera lingers on the Zamboni driver whom waits to finish his work as he earnestly and tenderly lip-syncs – both parts – of the song.

It all feels less cruel than Sandler’s more recent releases. There are multiple older women in the film; including one Happy sleeps with, yet none of them become the butt of a joke. The one that asks for Happy to sign her breast even gets a big hug. Now, you’d get the sense that Sandler’s character would freak out over their arrival and rag on their freakish nature. Add to that a pair of fun villains in MacDonald’s Shooter, still a superb dick, and Stiller’s ruthless nursing home head, complete with epic handlebar-moustache, and the seasonings of Happy Gilmore are consistently amusing.

The core of the movie isn’t especially engaging though. Happy’s attempts to be a better, calmer person are fine. The montages of turning into a good golfer fine. The jokes are fine. Few of those elements are more than that, making for a perfectly acceptable bit of cinema to have on while organizing your mail, but not a comedy classic.